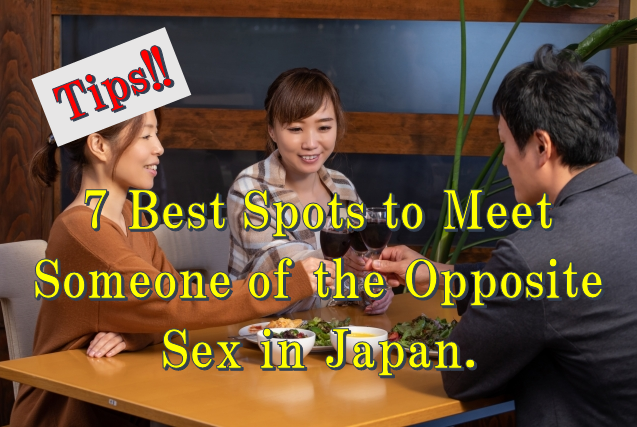 7 Great Spots to Meet Someone of the Opposite Sex in Japan.

I think there are many reasons to visit Japan, such as studying abroad or traveling,
but I think “I want to go out with Japanese people!” “I want a Japanese girlfriend
(boyfriend)!” There must be a lot of people.

There are many opportunities to interact with the opposite sex in Japan, but it
may be a little limited when it comes to meeting men and women. Because the
Japanese are shy around new people, they only pick up girls in certain places.
It is a meeting place called “Nampa Spot”.

In Japan, few people pick up girls in supermarkets or in the streets. In rare cases,
there are some ferocious people who pick up girls passing by in downtown and
downtown areas, but basically, if you talk to them suddenly, they will look suspicious,
or if you are a man with a good physique, you will often be scared by Japanese
women with a lot of petite people.

This is due to the shy national character of the Japanese. The culture that cherishes
anniversaries and events such as the success of Halloween in Japan in recent years,
and the day spent with the lover in Japan, which represents Shibuya, comes from
such a background. Because I am a Japanese who usually restrains myself and lives
seriously, I want to give a reason for something.

So, if you don’t make a mistake in the situation in Japan, you can meet the opposite
sex smoothly.

7 meeting with the opposite sex in Japan!

(1) Bars such as clubs and BAR

Even though it is a social space, there are cases where people are shunned because
they are foreigners. If you participate as a foreign lecturer in a language school or
a foreign language teacher, it is easy to become familiar with the environment, and
there are many Japanese who like overseas in the first place, so “it is cool!” “It’s so nice!”
It is easy to think.

However, the problem is that english conversation classes and other language schools
sometimes prohibit love with students, and there is a possibility that private interaction
is prohibited. Volunteering, not at school.

[A Day in My Life: Language School in Fukuoka, Japan]

It is less difficult than a language school, and in Japan there is a cafe terrace where you
can learn English called “English Conversation Cafe”. Because Japanese people come
to learn English, it is easy to talk to them, and they can interact with each other in
a natural way without pushing out the color of love. It is also a recommended point
that the price range is inexpensive because it is a coffee shop.

It is a share house that has become popular outside Japan, but there are many
residents in Japan, such as being featured in TV programs and dramas in recent years.
It costs time and money, but because it is under one roof, private exchange sit down
is also easy to build. Recommended for social lovers.


(5) Participate in a joint party with Japanese people

In the case of play, it is avoided, but if you are looking for a serious relationship,
we recommend that you participate in an event organized by the International
Association. However, since it is a serious party related to environmental issues
and cross-cultural exchange, it may be a little difficult when it comes to meeting
purposes.

You don’t have the courage to call out to me all of a sudden! It is safe people
, SNS and matching app. Depending on your hard work, you may be able to
without going to Japan.
Facebook, Instagram, Twitter, etc. used in Japan. “OMIAI” and
“Pairs” are famous for being easy for foreigners to use in Japan’s excellent matching
. Because there is an item of “foreigner” in the search condition, you can meet
Japanese who like foreigners and Japanese who are looking for foreigners.
There is no problem with the difficulty, but what I am worried about is the seriousness
love. It would be nice if you only have a physical relationship or , but
it comes to , it may be subtle.

It was a place to meet people of the opposite sex in Japan.

I met a wonderful Japanese on this occasion.