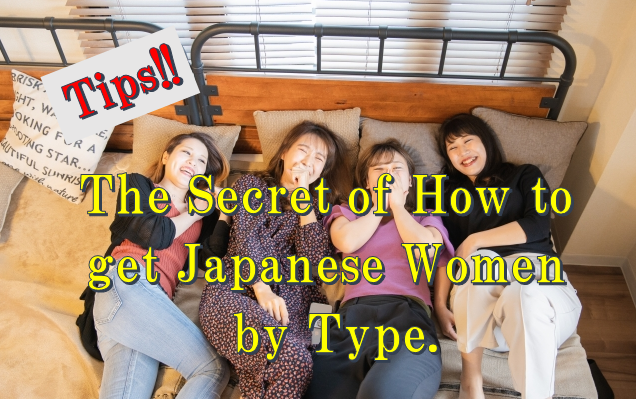 The Secret of How to get Japanese Women by Type.

The Secret of How to get Japanese Women by Type

Japanese women with obedient, quiet, and pretty appearance are popular all over the world. Black hair i mysterious and beautiful. Oriental faces are exotic and many people like it. Or a woman from her own country who is strong-willed
People who are tired of women want to go out with a neat Japanese woman! I think.

It is sometimes criticized as yellow fever, but women are still weak in pushing,
It is also true that there are a lot of people who like foreigners, and there are more types that can easily be done than other countries. It’s also difficult to capture
From the perspective of the Japanese, will introduce strategies for each type.

How To Pick Up Japanese Girls In Japan (クラブ版！日本で日本人女性をナンパする方法)

The easiest way to pick up in Japan, where you can see the night club and the experience of men.
It is young people called. These people are just right if it is a body search. Hair Color
is flashy, feel easy to understand.
There are some places where it’s OK if you anime, games, manga,
It’s ok to be a character, so it’s okay to talk together and show off what you like.
Also. I think that you can say even if is traced.
In general, Japanese men often appeal to their titles, so their titles and background is effective.

By meeting places and stories, you can tell if you have a longing for foreigners. I try to put the search moderately.
Many Japanese have white complexes. Their nose like a white man, a high body
If there is a thing, most people think it’s cool. Whether you’re black or of color
Because it tends to be popular in Japan, it is rare Japanese women who usually
Foreign men may be fresh and attractive.

Compliment and get on!

Japanese men are reluctant to see it globally, so they can escort women, treat them as women, and compliment to them.
I don’t do much to do that. So women don’t have confidence, and they love you, love you.
I’m not used to the word, especially when you’re a woman who doesn’t normally be popular in Japan, by hot words. The color of the hair is beautiful, eyes are beautiful, and the skin is beautiful.
Or cute or cute, anyway

Most of the common Japanese women are clean and wary. The Japanese are so kind.
It is not often treated, but it is rejected even if pick up it suddenly, and it is disregarded.
Let’s not forget to care about nature gently the last.
From the fact that the male idol named “Johnny’s” is very popular in Japan, sexy opposite sex both sexes
Because the opposite sex which is not mature is preferred than, it is recommended to appeal to the physical beauty. You had better for Japan without expressing a sense of foreigners.

It is good to try to be a gentleman’s correspondence to a Japanese woman of Yamato Nadeshiko. You may want to show strength and masculinity, but I don’t think overdoing is good. It’s good to be able to, but with a kind response from the heart, If you escort, the value rises. If it becomes a good atmosphere, hug lightly, and do a body touch casually, and This may be normal, but if you think, you win. If you feel a little intimate, the rest you touch the Don’t feel bad, do be smart.