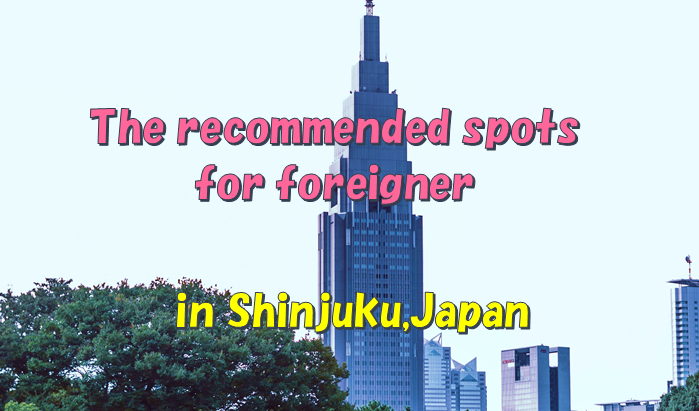 Introducing the recommended spots for foreign tourists in Shinjuku,Tokyo,Japan by theme!

Speaking of Shinjuku, it is well known as the place where the Tokyo Metropolitan Government Office is located, but in fact there are countless sightseeing spots.
In this article, we will introduce carefully selected ones that are especially popular among foreign tourists in Shinjuku.
It is divided according to the theme, so please check from what you are interested in.

Speaking of the landmark of Tokyo, it is the Tokyo Metropolitan Government Office.
The current building was opened in 1991.
The site is home to more than 10,000 people, including the seven-story Tokyo Metropolitan Assembly Building, the 48-story 1st Government Building, Tomin Square, and the 34-story Second Government Building.
Part of the Tokyo Metropolitan Government Office is open to the public, and the observation room on the 45th floor overlooks the main spots of Tokyo, such as Tokyo Tower, Tokyo Skytree and Tokyo Bay.
There are also cafes, restaurants and souvenir shops, and many foreign tourists come for sightseeing purposes.

Shinjuku Gyoen is said to be a place where tourists come when they visit Shinjuku.
Shinjuku Gyoen is a landscape garden with a large site of about 59 hectares, and there are various styles of gardens including Japanese gardens in the park, delighting the eyes of the viewer.
Shinjuku Gyoen, which was established in 1906, is worth seeing as a garden that retains the image of the Meiji era.
You can enjoy the scenery of the four seasons, such as cherry blossoms in spring and autumn leaves in autumn.


■ A place to feel nature in Shinjuku

It is a place where you can feel nature when you want to take a break away from the hustle and bustle of the city.
Here are some sightseeing spots you would like to visit when you are sightseeing in Shinjuku and want to get in touch with nature.

Meiji Jingu Gaien is a Western-style garden built in 1926 by private volunteers to honor the achievements of Emperor Meiji and Empress Akinori.
It is not just a garden, but there are various facilities in the park, such as the Shotoku Memorial Painting Museum, which is designated as an important cultural property of the country, the Meiji Jingu Baseball Stadium, The Meiji Jingu Gaien Koniko Park, and the Meiji Jingu Gaien Ice Skating Rink.
One of the most popular among foreign tourists is a row of ginkgo trees that last about 300 meters on Aoyama Street.
In autumn, the row of ginkgo trees is dyed with gold, and many people come to see its beauty.
Because it is also known as the location of the movie, there is no loss in visiting.

Toyama Park is a metropolitan park located in the ward, and the site includes Mt. Hakone.
Mt. Hakone is not a high mountain at an altitude of 44.6 meters, but it overlooks the city from the top and is popular as a scenic spot.
Many cherry trees are planted on the site, and many people enjoy cherry blossom viewing in spring.
In addition, the autumn leaves are beautiful, and a lot of people visit the park at this time of year.
There is a walking path in the park, so why not take a leisurely stroll and enjoy nature?

■ A place to feel Japanese culture

Shinjuku has many modern buildings, but there are also historical buildings inside.
Here are some sightseeing spots that leave a strong japanese culture.

Hanazono Shrine is an Inari Shrine with a beautiful contrast between red and white.
It is said that the Hanazono Shrine was built when the exact year was not understood, but it already existed around 1590.
Hanazono Shrine has been hit by many fires, and the present shrine building was built in 1965.
Since ancient times, he has been known as a god who protects the city, and regular events are held.
“Tori no Ichi” is an annual event, and on the day of the event, it is crowded with people who wish for a prosperous business and buy a bear’s hand.
If you want to experience the unique culture of Japan, Hanazono Shrine is the perfect tourist attraction.

Shinjuku has the image of a big city, but Kagurazaka is an attractive city with a strong Japanese atmosphere.
Kurosaka-wall, which long lasts in a stone-paved alley, has a good old Japanese image.
Kagurazaka is the place where you can take such a relaxing sightseeing trip by stopping at the café that caught your eye while strolling.
Kagurazaka is also known as a cat town, and there are shops selling cat goods.
It is also a good idea to stop by the memories of Japan.

Facilities where you can experience Japanese culture

Japan has its own culture, and there are ninjas, samurai, and other things that are widely known overseas.
Many people want to experience this kind of culture.
We will introduce the facilities where you can experience Japanese culture in Shinjuku.

Samurai Museum is so popular among overseas tourists that 90% of visitors are said to be foreigners.
This section introduces the history of samurai who were active from the Kamakura period to the Edo period.
In addition to the armor that is said to have been actually worn, the museum also exhibits replicas related to the Toyotomi and Tokugawa families.
If you are interested in a samurai-like way, such as a killing show, a japanese course, or a calligraphy class, you won’t get tired of it all day long.
In the building, you can wear a combination of your favorite props such as helmets and swords, and you can also take photos.
We also provide guides in English.

The Back Kendo Hall Shinjuku Ninja Karakuri Yashiki is located in a building close to Shinjuku Station.
When you go inside, the world of ninja color spreads, and you will feel the illusion that you have gone back in time.
Dressed as a ninja, you can learn about shuriken throwing, ninjutsu, and how to use swords.
If you like ninjas, it will be a tourist attraction not to be missed.

■ A place where you can enjoy night-out

Shinjuku is not only sightseeing during the day, but also a lot of night play.
Here are some of the places where you can enjoy the night in Shinjuku.

Kabukicho is known as one of the most famous downtown areas in Japan.
Kabukicho was born after the war, and initially we wanted to attract kabukiza in order to provide entertainment to the citizens.
After that, movie theaters and theaters appeared instead of Kabukiza, and restaurants began to line up, and it developed as a neon town.
Located near Shinjuku Station, kabukicho first street is known as the main street of Kabukicho along with Central Road.

The robot restaurant in Shin Kabukicho is a very popular tourist attraction for foreigners.
Colorful lighting illuminates the store, and giant robots perform entertainment shows.
Especially, the show of the giant robot and the dancer is popular, and it raises the tourist feeling.

Omoide Yokocho is also known as Shinjuku Nishiguchi Shopping Street, and there are a lot of small restaurants.
Shinjuku Nishiguchi Shopping Street was located in the black market after the war, and then gradually shifted to the shopping district.
At its peak, there were about 300 shops, and it is said to have continued to the Odakyu Department Store Shinjuku.
Currently, it has been reduced to less than half, but it is popular with foreign tourists when you come across restaurants that feel good old Japan, such as izakaya, motsuyaki shops, set restaurants, and yakitori restaurants.