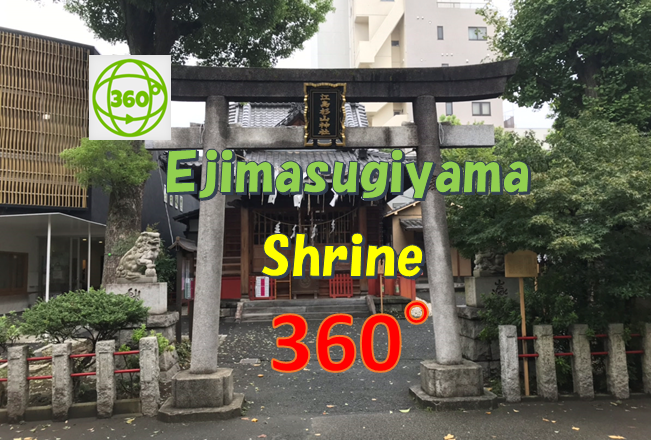 Ejima Sugiyama Shrine is a shrine in Sumida-ku, Tokyo.

Outline
The shrine was built in 1693 (Genroku 6). Sugiyama Waichi, the founder of the Kanshitsu acupuncture method of acupuncture, was given land in Honjo Hitotsume for his success in curing the illness of Tokugawa Tsunayoshi, the fifth shogun of the Edo shogunate. In addition to his own residence, Sugiyama opened the Sugiyama School of Acupuncture for the Visually Impaired, the world’s first educational facility for the visually impaired, on this land. In consideration of Sugiyama’s continued pilgrimage to Ejima Benzaiten (now Ejima Shrine), Tsunayoshi allowed Benzaiten to be consecrated in this area. During the Edo period, the shrine was called “Honjo Hitotsume Benten Shrine.

In the Meiji era (1868-1912), the land of Honjo-Ichitsume, which had been under the jurisdiction of the Shogunate, was confiscated by the Meiji government, but the shrine buildings enshrining Benzaiten escaped confiscation as a “shrine” and were renamed “Ejima Shrine. In 1952, the two shrines were enshrined together and renamed “Ejima Sugiyama Shrine.

In the precincts of the temple, there is a rock cave modeled after the one where Sugiyama practiced his art on Enoshima Island. It is said to have been built shortly after Sugiyama’s death. The monument is the only Braille monument in the world.