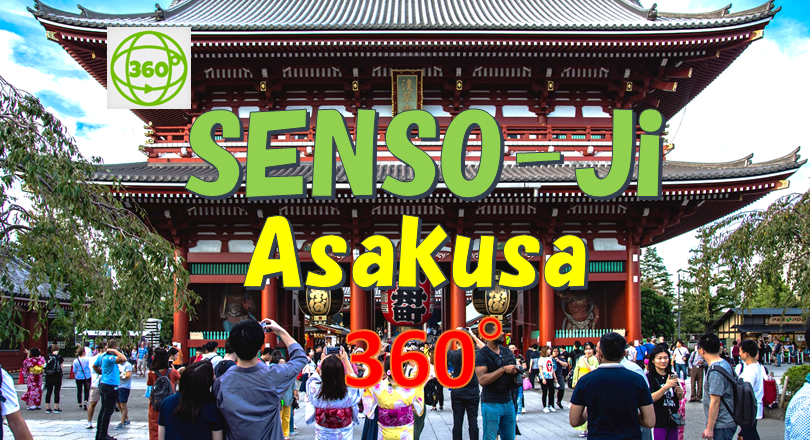 Sensoji Temple
Located in Asakusa 2-chome, Taito-ku, Tokyo, it is the oldest temple in Tokyo. The name of the temple is Kinryuzan. The main deity of the temple is the Holy Avalokitesvara Bodhisattva. The temple originally belonged to the Tendai sect, but became independent in 1950 and became the head temple of the Seikanon sect. It is widely known as “Asakusa Kannon” or “Kannon-sama of Asakusa” because of the Kannon Bosatsu as the main deity. It is the only one of the 33 sacred places of the Kannon in Bando in Tokyo (No. 13). It is also the first temple of the 33 sacred places of the Kannon in Edo. As one of the most popular tourist spots in Japan, the temple attracts a large number of visitors every year on New Year’s Day, and the number of visitors is always in the top 10 in Japan.

Nakamise Dori
The 250-meter-long Omotesando approach from Kaminarimon to Hozomon is lined on both sides with stores selling souvenirs and confectionaries, and is called “Nakamise Dori. There are 54 stores on the east side and 35 stores on the west side. The stores, which have the appearance of temple buildings, were rebuilt in 1925 with reinforced concrete structures after being damaged in the Great Kanto Earthquake.
Sensoji Temple gave permission to the local residents to open barbershops (hut-hanging stores) in front of the eaves of the branch temple in Minamitani, in exchange for assigning them the task of cleaning the temple grounds. This was around 1685, and is said to be the origin of Nakamise.

Source: Wikipedia, the free encyclopedia
Go to navigationGo to search