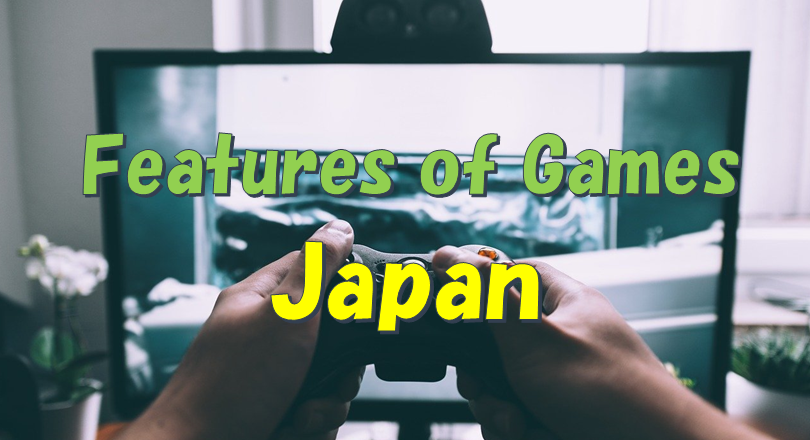 1.Characteristics of Japanese games.
2.Differences in games between Japan and other countries.
3.Introduction of popular games.

Today, games are developed and released by many different countries and manufacturers, but the popularity of Japanese games is still strong and they have many fans.
So what are the characteristics of Japanese games compared to those of other countries?


Many of the characters are deformed.

Characters in foreign games are basically sculpted to be more realistic, while Japanese games tend to have more beautifully shaped characters, with less emphasis on reality.
For example, Cloud, a character in the popular game “Final Fantasy,” uses a large sword as tall as he is, but his body is as thin as a model.
If this were a foreign game, he would have had a muscular body, but Japanese games are designed with an emphasis on appearance rather than reality.
This characteristic is also evident in character makeup, which is common in recent games.
It is difficult to create a face that looks real at best, or a beautiful woman or an unrealistically handsome man at worst.
However, in Japanese games, it is not uncommon to have cartoon-like parts, and it is possible to create a beautiful character as a fictional existence.

There are many masterpiece RPGs in Japanese games such as Pokemon and Dragon Quest.
What they all have in common is that they all have a set storyline that you basically follow.
For example, in the case of Pokémon, in every series, there is a main character, his rival, Dr. Orchid, Dr. Nanakamado, etc. First, you get your first Pokémon from Dr. Orchid for some reason, and then you have a battle with your rival.
Basically, there is no escaping this flow, and every player follows the same story.
The ultimate goal of the game is also clearly set, whether it is to become a Pokémon master or to defeat the Demon King. Of course, you can enjoy sub-elements along the way, but basically the goal of the game is to achieve that goal.

Depending on the game genre, the difficulty level of Japanese games is generally easy.
For example, the Super Mario series (with a few exceptions such as “Super Mario Bros. 2”) is not very difficult, making it easy to play even for people who are not very familiar with games.
In addition, “New Super Mario Bros. Wii” has a “Otemoto Play” feature for players who have died many times in the same stage, making it even less difficult to complete.

2.Differences in games between Japan and other countries.

In addition to the points mentioned above, there are many other characteristics of Japanese games.
So, what are some of the differences that appear when comparing Japanese and foreign games?

Many overseas games are aimed at gamers, and it is not uncommon for the difficulty level to be set high enough to satisfy those who are skilled at playing games.
On the other hand, in Japan, games are not limited to gamers but also include light users, and some are even released for families.
For example, games developed for the Wii such as “Hajimete no Wii” and “Wii Sports” are notable.
These games are designed to be played intuitively not only by children but also by parents and grandparents who do not usually play games.
Also, “Brain Training for Adults”, which made it into the top 10 of the 2006 New Words and New Trends Awards, targets middle-aged and older people and is different from the gamer segment.

The story is a straight line.

Like Pokémon and Dragon Quest, Japanese games (especially RPGs) focus on forcing the player to follow a clearly defined storyline.
Compared to foreign games that have a storyline but can be played without leaving it, Japanese games are like reading a novel.
This difference can also be seen in the structure of the game’s field and its changes.
In “Mother 2: Geeg’s Counterattack,” which was released overseas under the name “Earthbound” and is still very popular in Japan more than 20 years after its release, you will find towns such as Onet and Tucson, but depending on the storyline, you may not be able to go to the next town or return to the previous one.
The reason for this is to let the user tour the towns as the game unfolds and not to confuse the story.

The American game series “Grand Theft Auto” has become popular all over the world because of its realistic depiction of crimes such as stealing vehicles and killing people on the street.
The FPS (First Person Shooter) genre is also popular overseas, where the player’s head explodes and internal organs fly out when hit by a bullet.
On the other hand, there are few Japanese games that depict bloodshed in a realistic manner.
Even when the target is non-human, such as demons, the depiction of bloodshed and death is kept to a minimum.
Even when enemies are defeated, they just fall to the ground and there is rarely a pool of blood on the ground, and even if there is, it disappears quickly.
Even in RPGs, the word “killed” is rarely used, and in most cases it is “collapsed,” “fainted,” “came to himself,” or “became docile.
In this way, grotesque and violent expressions are moderated in Japanese games.
A famous example of this is the Mother series, including the aforementioned “Mother 2”.
In the Mother series, there are weapons such as “good bats” and “rag bats,” while “wooden bats” and “metal bats” do not appear.
Shigesato Itoi, who designed all the games in the Mother series, said, “The sight of hitting an enemy with a baseball bat is gruesome, and if wooden or metal bats were used, it would make the scene more graphic. If you use a good bat or a ragged bat, the existence of the bat becomes abstract and does not evoke the image of combat.
While Japanese games have few grotesque expressions like this, sexual expressions are not well regulated, and there are many cases where the presentation has to be modified when exporting overseas.
For example, the PlayStation 4 game Senran Kagura Burst Re:Newal, released in 2018, has a “skinship” mode that allows players to touch the bodies of female characters, but the international version of the game was forced to remove it.

Here are some Japanese titles that are also popular overseas.
Some of them have already been released in overseas versions, so please give them a try.

Dragon Quest (also known as Dracula) is another series released by Square Enix.
The first game, Dragon Quest, was released in 1986.
When the overseas version was first released, it was called “Dragon Warrior” due to trademark issues overseas, but it didn’t attract much attention.
However, the use of an English accent for the character’s voice drew attention to the game.
Basically, the story is about the main character who gathers friends to save the world.
There are also derivative works, such as the series featuring “Toruneko” from the Dracula series, and Dragon Quest Monsters, in which the player catches monsters from the Dracula series, makes them friends, and raises them.
Many of these games have been remade for various hardware and applications, and their appeal is that they are easy to play.

Pokémon (a.k.a. Pokemon) is an RPG released by Game Freak.
The first title was “Pokémon Red/Green” released in 1996, and the game has exploded in popularity through anime and cards, not to mention derivative works.
As of 2018, the total number of units shipped has even surpassed 300 million worldwide.
Basically, the game is about the main character catching Pokémon, raising them while defeating various trainers, and eventually becoming a champion.
The number of Pokémon in the first generation of the game was 151, but now there are 898 types.

There are many other popular games available in Japan, such as Super Mario and Kingdom Hearts.
There are many ways to enjoy these games, so please try them out.