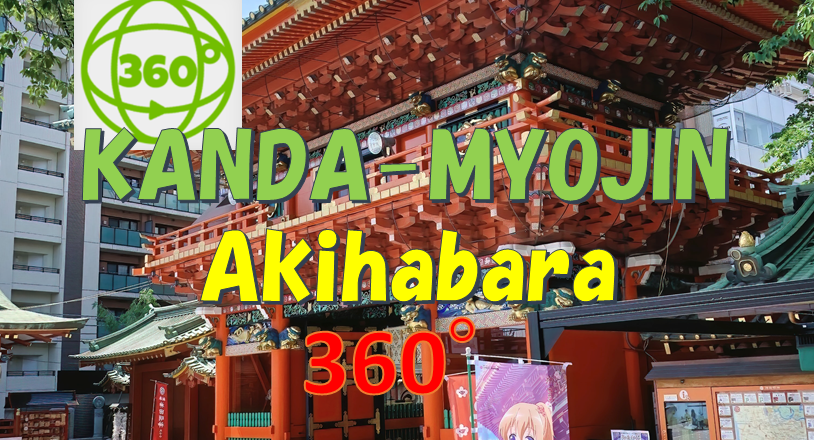 It is known as the shrine where the Kanda Festival is held. It is the chief deity of 108 town councils, including Kanda, Nihonbashi, Akihabara, Otemachi, Marunouchi, the old Kanda Market, and Tsukiji Fish Market. The former status of the shrine was Fusha (Associate Imperial Shrine until 1870). Currently, it is an attached shrine of the Jinja Honcho. It is also one of the ten Tokyo shrines that were formerly associate imperial shrines.

History
According to the shrine’s legend, the history of the shrine dates back to the 2nd year of the Tenpyo Era (730), when an Izumo clan settled in Shibasaki Village, Toshima-gun, Musashi Province, and enshrined Okonomikinushi as their ancestor deity. Kanda was originally the site of the Omita (Kanda) of the Ise Shrine, and the shrine was built to appease Kanda, and was called Kanda-no-miya.

The head of Taira no Masamon, who was defeated and killed in the Taira no Masamon Rebellion in 935, was taken from Kyoto and buried near the shrine, and the mound of Masamon’s head was revered by Taira warriors in Eastern Japan (Kanto region). During the Kagen era (early 14th century), an epidemic broke out, and a memorial service was held, claiming that Shogun Shogun was cursed. It is said that if you pray to the god Taira-no-Masakado, you will win the battle.

In the Edo period, the shrine was moved to Kanda-dai in Keicho 8 (8th year of the Keicho era) along with the expansion of Edo Castle, and then to its current location in 1616 (2nd year of the Genna era). In 1616, it was moved to its current location. The shrine was revered as the central shrine of Edo. The Kanda Festival is one of the three major festivals in Edo. The festival was called “Tenka Matsuri” because the floats entered the Edo Castle for the Shogun’s inspection. In those days, the floats were the main attraction, but the number of floats decreased significantly in the Meiji era (1868-1912) due to the spread of electric cables. The “Kanda Bayashi” is designated as an intangible folk cultural asset by the Tokyo Metropolitan Government. A gorgeous Momoyama-style shrine building was constructed in the early Edo period, and a Gongen-style shrine building was built in 1782, but it was destroyed by fire in the Great Kanto Earthquake of 1923. Later, in 1934, the shrine was reconstructed in the style of the Gongen structure using steel-framed reinforced concrete, which was rare at the time, and the main shrine and worship hall were saved from burning down in the 1945 Tokyo Air Raid, despite incendiary bombs falling on the precincts.

In the Edo period, the shrine was named “Kanda Myojin” and many of the surrounding towns were named after Kanda Myojin. When the shrine came under the control of the state in the Meiji era, it was designated as an Imperial Shrine in 1868. In 1874, when Emperor Meiji visited the shrine, Taira-no-Masakado, a retainer of the emperor, was considered unworthy of being enshrined in a shrine where the emperor worshipped. The spirit of Taira no Masamon was enshrined in the shrine grounds. The spirit of Taira no Shogun was moved to a regent shrine within the precincts of the shrine, but it was not until 1984, after the Pacific War, that it was restored as the main shrine deity. The shrine is now an attached shrine of the Jinja Honcho. It is also one of the ten Tokyo shrines that are former associate imperial shrines.

Due to its proximity to Akihabara (Akiba), a center of anime culture, the 2010s saw the release of “Love Live! In 2019, the shrine was recognized as one of the 88 holy sites of Japanese anime to visit, and a certification plate and red seal (stamp) were placed at the Kanda Myojin Cultural Exchange Center. Since 2016, the festival has been held on August 10.

Since 2016, “Kanda Myojin Summer Festival” has been held for three days on Friday, Saturday and Sunday around August 10. In the second edition, the first day was named “Anison Bon Dance” and was the main day to hang Anison Ondo, and in the fourth edition, it was called “Anison JPOP Bon Dance (Tokyo Bon Dance Fest 2019)”.

On December 15, 2018, the Kanda Myojin Cultural Exchange Center “EDOCCO” was opened in the precincts of Kanda Myojin with a multi-purpose hall “Kanda Myojin Hall” with a capacity of 700 people and spaces for sales, food and drink.

There is also a monument to Heiji Zenigata next to the right hand side of the main shrine on the premises, based on the setting that Heiji Zenigata, the main character in Gudo Nomura’s masterpiece “Heiji Zenigata: The Prisoner of War”, lived in a tenement under Kanda Myojin. Heiji Zenigata is a fictional character.