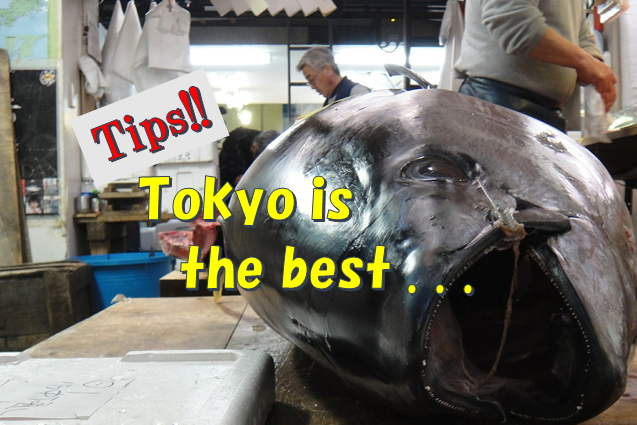 1. Tokyo is the capital of Japan!

Tokyo is known as one of the best cities in the world.
Not only foreign tourists, but also Japanese tourists visit here every day.
There are so many sights to see that it is impossible to visit them all in one day.
Tokyo is a city with so much to offer, and it is also a city with a lot to offer.
Let’s take a look at some of the things that make Tokyo number one in Japan and the world.


2. It has the largest population in Japan!


3. Tokyo is the most favorite place for tuna?

Sushi is one of Japan’s most famous dishes.
There are a variety of delicious ingredients such as salmon, yellowtail, squid, octopus, etc., but the most popular is tuna.
Not only do Japanese people like tuna, but many foreigners do as well, and Tokyo is actually the place where tuna is caught the most.
Tokyo is actually the place that catches the most tuna, with a catch of 150,000 tons per capita.
There are many long-established sushi restaurants in Tokyo, where you can enjoy fresh and tasty tuna thanks to the fishermen who catch it in abundance.
Tokyo also ranks second in the nation in the catch of bonito.


4. Tokyo has many earthquakes!

Let’s now turn our attention to the part of Japan where Tokyo is the worst place to live.
Japan is known for its world-renowned automobile companies such as Toyota and Nissan.
Not a few people overseas drive Japanese cars, and many people think of Japan as a country with cars.
On the other hand, Tokyo has the worst car ownership rate in Japan.
This is because Tokyo has a well-developed transportation system, including the Yamanote Line.
As a result, there is no need to own a car, as it is possible to go anywhere without one.
Traffic accidents are also rare, and in 2020, the city had the lowest number of traffic deaths in Japan.
It also has the fewest gas stations in Japan.
On the other hand, many people ride bicycles, and the city has the third highest rate of bicycle ownership in Japan.
If you live in Tokyo, buying a bicycle will make your life more convenient in many ways.

There are many delicious foods in Japan.
In addition to sushi, which I mentioned earlier, Japanese food such as okonomiyaki and tempura are famous all over the world.
Curry and rice is probably the most popular dish prepared in many households in Japan.
Curry originally originated in India, but in Japan it has evolved into a thickened dish served over rice.
Curry is a favorite of all Japanese people, but Tokyo is actually the place where curry is least eaten in Japan.
The amount of curry roux consumed in Tokyo is 1,268 grams, the worst in the country, and nearly 700 grams behind the number one prefecture, Tottori.


8. What are Tokyo’s specialties?

In Japan, there are always specialties that are associated with a particular prefecture.
Udon noodles in Kagawa Prefecture and mangoes in Miyazaki Prefecture are examples.
On the other hand, Tokyo has few such agricultural products, so there are not many things that can be called specialties.
Even among Japanese people, there are probably only a few people who can tell you what Tokyo is famous for.
In fact, Tokyo is the largest producer of leather shoes in Japan.
It is no wonder that Tokyo is a place where many businessmen walk around.
For businessmen, leather shoes are their buddies, but they quickly wear out when they keep walking on business.
This is why leather shoes sell well.
Asakusa is one of the most famous places in Tokyo where many leather shoe manufacturers are located, and is attracting attention from all over the world as a place where you can buy good leather shoes.


9. Is Tokyo the driest place in Japan?

Japan is famous for being an island nation.
One of the characteristic climates of an island nation is that it is very humid.
The summers in Japan are hot and humid, and people from other countries have to struggle to get used to the climate.
In this situation, Tokyo is also a relatively dry place in Japan.
The relative humidity is about 60%, which makes it more comfortable than other places in Japan.
However, summers are hot, so an air conditioner is a must for living in Tokyo.


What is the number one thing Tokyo has in the world?


10. Tokyo is the most attractive city in the world!


11. Tokyo has many good restaurants!

I hope you have learned more about Tokyo.
Well then, enjoy your trip to Tokyo!